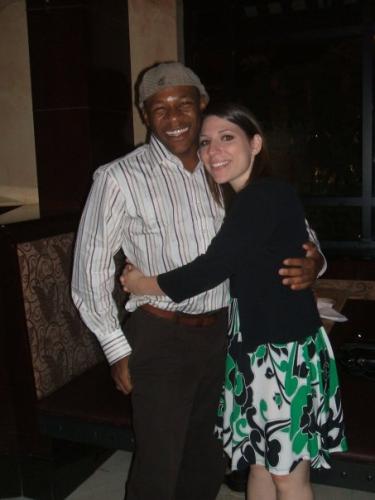 Dwayne Waite, Jr. is a 2002 PFEW Graduate and past Resident Hall Advisor for the Foundation. In July of 2009 Dwayne came back to PFEW, but this time as a volunteer Company Advisor. That same summer, Mackenzie Farone volunteered as an Advisor for her first time, coming on the referral of a friend. Neither expected to see anyone their own age volunteering, but the very first night they were introduced by others and spent the rest of the week getting to know one another. At the time, Dwayne lived in Charlotte, NC and Mackenzie lived in Pittsburgh, PA. Phone calls every night led to trips to see each other and well…..the rest is history.  On Saturday, April 12, 2014 Dwayne and Mackenzie were married in a beautiful ceremony in Hopewell, PA. They now reside in Pittsburgh where Dwayne is the Marketing Associate for Schell Games and Mackenzie is the Sr. Manager of Corporate Communications at Greiner Bio-One.

When asked what she has learned from volunteering at PFEW, Mackenzie said "I have learned that there are some really amazing people of all ages that you get to meet when you become part of a program like this.  Once a year, we all get together and it's like we never left – all ready to inspire the youth of America." Dwayne's response to the same question was, "There's always an opportunity to learn something new. After high school, it's officially cool to know things. From the other volunteers, learning business tips and sharing experiences has been both rewarding and encouraging."

Return to all Volunteer Spotlight